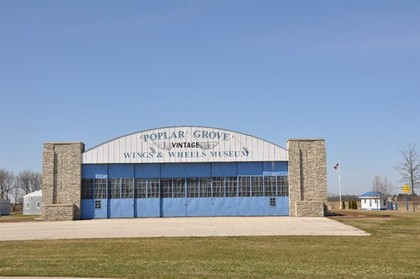 The Waukesha Hangar is the Queen of the Poplar Grove Vintage Wings and Wheels Museum Campus. An historic 1937 airplane hangar, the Waukesha Hangar serves as the main museum building, housing all museum exhibits, our collection, our education classroom, our gift shop, and our unique transportation history research library. Not only are there several items to explore inside, there is also much to explore outside the museum. Our museum is also home to several other historic buildings which visitors are free to explore. The Poplar Grove Vintage Wings and Wheels Museum is always a great place to visit and revisit in the future. Be sure to check back often to see what new and exciting events and programs are happening here at the museum.

Once World War II started, the Waukesha Hangar was used to support the war effort. The Waukesha Airport, in conjunction with Carroll College, began an air corps training program that helped train cadet pilots for wartime service elsewhere. In addition, the Civil Air Patrol, made up of local Waukesha County residents, used the hangar extensively during the war and was their primary base of operations for the county. When the war ended, the airport and the Waukesha Hangar took on a more domestic role and became primarily a place for recreational airplane use.

By the 1990s, the Waukesha Hangar was largely obsolete and proposals were floated to tear down this historic, yet dilapidated building. This is when concerned members of the Vintage Wings and Wheels Museum literally flew into action and traveled to Waukesha to see if they could save this building. After two years of negotiations, disassembly, demolition, loading, hauling, unloading, reassembly, reconstruction, and upgrades, the Waukesha Hangar lies here on the museum campus, restored to its former glory and housing a world-class museum.

The building’s simple architectural features suggest the verticality of the Art Deco style. The four stone towers that surround the hangar building give the building an imposing, almost skyscraper appeal, yet the limestone veneered exterior gives the museum a rustic, pastoral feeling. The limestone, otherwise known as “Lannon Stone”, was probably quarried in Waukesha County and lends an artistic quality to the hangar. The WPA also used these limestone veneers when designing parks and recreation buildings throughout Wisconsin. In fact, the WPA-constructed terminal and hangar buildings at Madison’s airport also share this motif.

Originally, the Waukesha Hangar was flanked by several small buildings including a two-story airport administration building that obscured much of the stone-work. Once the building was moved here, it was freed from the eyesores that obstructed its beautiful architecture, and stands as a monument to the diligence and care of its architects, builders, and stewards.