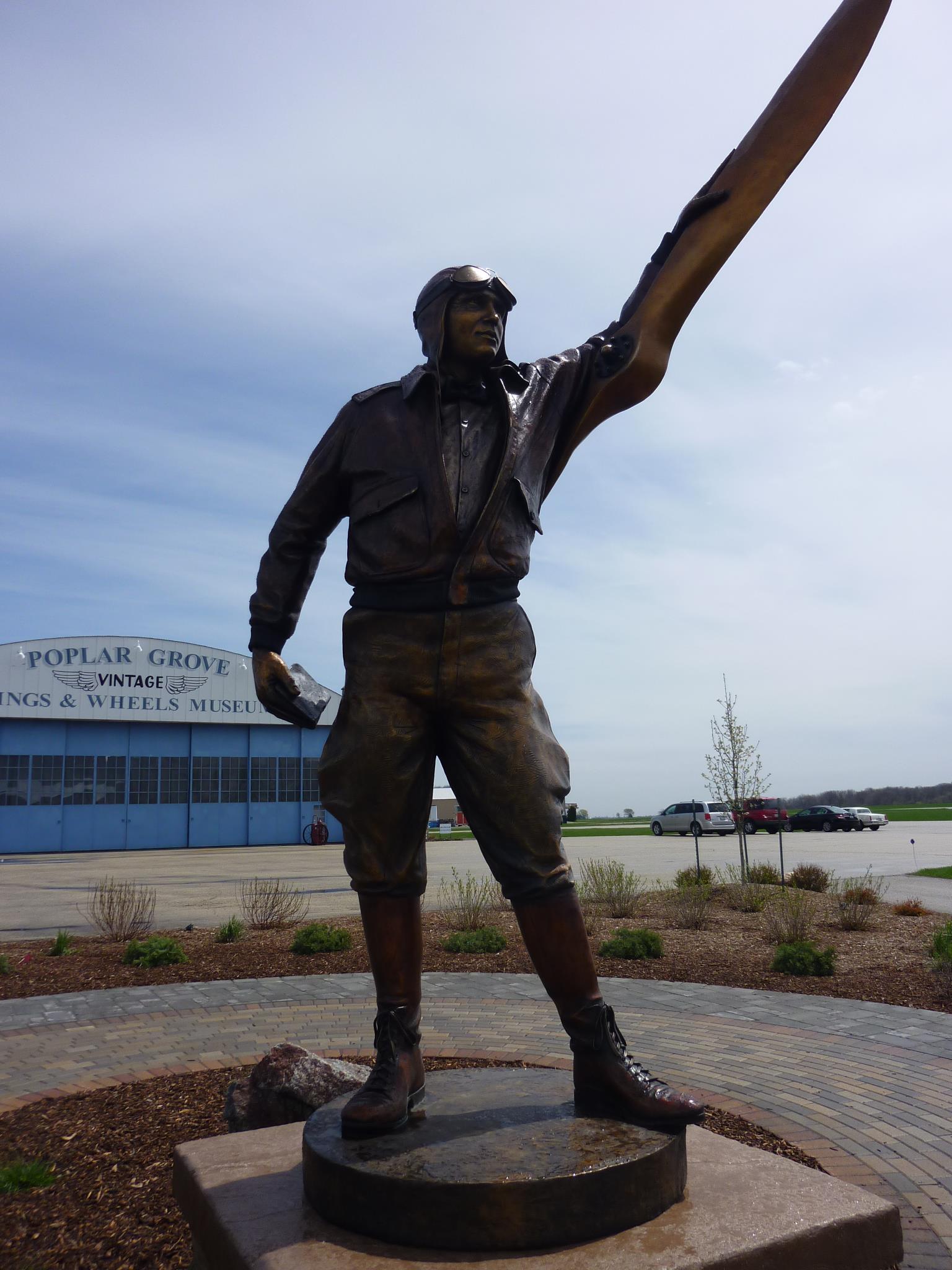 Elrey Borg Jeppesen innovated an industry through mere necessity. Motivated by self-preservation while flying as an airmail pilot in the early 1930s, Jeppesen began taking notes while flying dangerous unmarked routes often at night. His adventurous, resourceful pursuits led to the development of a business that revolutionized flight and continues to be a world leader in the field of aerial navigation.

Born in 1907, Jeppesen was raised in Portland, Oregon and garnered a love of flight at a young age. He had his first flight in an airplane in 1923 at the age of 16 and was henceforth determined to become a pilot. In the late 20s he left high school to live in the corner of a T-hangar at Pearson Field in Vancouver, Washington.  He started out doing odd jobs around the airport and took flying lessons at every available opportunity. Jeppesen soloed in 1927 after little more than two hours of flight instruction and purchased his own airplane, a 1916 WWI surplus JN4D Jenny. The following year he joined the Renkin Flying Circus. He barnstormed with the circus, working as a ticket taker, prop spinner, wing walker and pilot.

In 1930 Jeppesen took a job that would transform his life and aviation history. He began flying as an airmail pilot for Boeing Air Transport. His first route was the treacherous Salt Lake to Cheyenne route, which he often flew at night. At that time navigation aids for pilots were virtually non-existent. Most followed highway maps or the Union Pacific Rail Tracks, which they called ‘Hugging the UP’. Early aviation was treacherous at best, and airmail pilots were required to fly regularly across unknown terrain with unpredictable weather conditions, and many lost their lives to the simple pursuit of delivering the mail.

In an attempt to keep himself safe while covering dangerous terrain, Jeppesen began taking notes on the man made and topographical features along the routes he flew. In a short time, Jeppesen expanded his efforts traveling the routes by car, climbing water towers and other elements to record elevations. He interviewed police, surveyors and farmers amassing a record in a penny notebook that came to be known as the little black book. Jeppesen’s little black book was a hand drawn outline of as much information as he could garner that would help keep pilots safe and on course. He included airport layouts, locations of emergency landing strips, locations and elevations of dangerous obstacles, elevations of terrain and phone numbers of farmers to call for weather reports.  In short time other pilots learned of his record and were eager for the lifesaving guidance. In 1934 Jeppesen began selling copies of the book for $10 apiece and the Jeppesen Pocket Airway Manual was born.

In the late 1930s Boeing Air Transport became part of United Airlines and Jeppesen became a Captain for the commercial airline. With the help of his wife Nadine, whom he married in 1936, his own company grew rapidly. By the early 1940s Jeppesen Airway Manual was a full time business in addition to Jeppesen’s full time flying career with United Airlines.
During WWII Jeppesen received contracts to produce charts for the US Navy and Air Corps; by the end of the War, his well-established reputation paved the way for international success. In 1954, Elrey Jeppesen retired from United Airlines to focus solely on his own business. The company’s rapid growth continued, and by 1960 annual sales topped $2.5 million. Jeppesen sold his company the following year. By the end of the decade, Jeppesen and Company was the largest compiler and publisher of aerial navigation aids in the world. The company continues operation today as a leader in the field of aerial navigation; the Jeppesen Airway Manual remains the essential navigational aid for commercial pilots. When you see a pilot carrying his flight bag, it is his “Jepps” that are inside.

The Aviator
The sculpture standing before you was designed by accomplished sculptor George W. Lundeen. The piece stands 16 feet tall, and weighs just over 1000 pounds. It was designed by Lundeen in his studio in Loveland, Colorado. The piece was created through a lengthy and detailed process beginning with a detailed sketch which is then made into a miniature clay version, at that point a full size clay sculpture is created, from this piece a hollow mold was fashioned into which the molten bronze was poured.

This is the fifth such sculpture to be created by Lundeen – the first and most famous was dedicated in 1994 and stands in the main terminal of the Denver International Airport which bears Jeppesen’s name. The others are located at Jeppesen headquarters in Englewood, Colorado; Jeppesen’s European headquarters in Frankfurt, Germany; and on the campus of the University of Saint Louis. The piece is a beautiful testament to the adventurous spirit and tenacious accomplishment of pioneer aviator Elrey B. Jeppesen.

Donors
This statue of Elrey Borg Jeppesen was generously donated to the Poplar Grove Vintage Wings and Wheels Museum by lifelong Belvidere residents and business owners Jack and Peggy Wolf. The Wolf’s dedication to the enrichment of their local community is felt throughout Belvidere and the surrounding area.